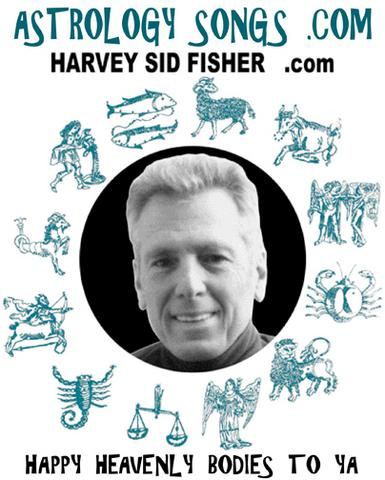 The Harvey Sid Fisher show at the Milky Way (Jamaica Plains, MA) this past Monday was not to be missed. If you have a zodiac sign (and I know you do), Harvey has a song just for you. For those of you who haven’t heard of the master showman from Los Angeles, he has written songs on three subjects: astrology (one for each sign of the zodiac), golf, and relationships. More on this after a few words about the opening act.

Opener Dr. Nancy Mrzocek was her usual frenetic self. She rocked harder than normal by starting the set with a rif heavy song called “Maybe You Love Me”. However, the next song was a half-assed attempt at reggae. Her band, the personnel of which is different for every show, was a rock trio lacking the keyboards she normally performs with. She spent the rest of the set waffling between rock songs and a lounge style, performing the proven crowd pleasers “Cosmic Pow-Wow” but also throwing in a lame version of “Take the A-Train” and inviting the audience to come see her jazz set sometime (no thanks). The crowd here was not into it, either because they were just waiting for Harvey’s set or because her singing ranged from “dying cow”, and “atonal” to just plain “can’t carry a tune”. In the past the singing was overlooked because she was fairly entertaining but overall a lackluster performance this time around.

Harvey took the stage at around 11:45 and was every bit as good as expected. A true showman, Harvey was dressed for the performance in bright red shoes, and a white suit with a pastel purple shirt. Backed by a local trio and dancing backup singers, he started the set by asking for requests from the audience. This was just a formality though as he promptly launched into “Aries” which I don’t think anyone had requested. He then continued with “Aquarius” and “Gemini” before breaking from astrology songs to do “the Olympic Song”, in honor of the upcoming summer games. This one was a sing along of sorts, imploring the crowd to yell “ra, ra, ra,” at the appropriate times.

Next he performed “Party Hard”, the first of his relationship songs, making sure we understood that they’re not love songs, but actually about couples fighting. This song got pretty saucy with a chorus that included Harvey singing “you’re gonna scream for your daddy” and the backup singers moaning in response “oh, oh÷daddy”. He then continued with astrology songs, doing “Libra” (a true standout), and “Virgo”. “Capricorn” was also turned into a sing along (which I unwittingly became party to when he handed me the mic) with the refrain “I was born a Capri, I was born a Capri, I was born a Capricorn”. The entire audience was swept off their feet, save for a lone heckler who was quickly ostracized by the crowd and relegated to the back of the room for his own safety.

Harvey saved his best relationship song for near the end of the set. “Talk to me” is a duet where the woman says “talk to me”, the man says “not today”, “talk to me”, “I don’t want to play÷please go away”. Needless to say he performed all twelve astrology songs to avert any rioting that may have ensued if anyone’s sign had been left out. He did not however, do any of the golf songs, despite “God of Golf” being a popular request. The last song of the show was a rousing extended version of “Taurus”. The set was running late and the club was trying to close so, apparently to save time, Harvey actually changed from his white suit back into his street clothes while still onstage performing!
The Astrology songs are timeless classics because the lyrics portray the characteristics (real or perceived) of each sign so well; such as “I’ll crusade for a cause and defend underdogs, I’m almost too good to be true” for “Sagittarius” or “I am the one you can rely on, I am the shoulder you can cry on”, for “Moonchild” (Cancer). I urge anyone who has not seen Harvey’s video of the astrology songs on the Daily Show or elsewhere, to go to Harvey’s website http://www.harveysidfisher.com/ , check out the lyrics and order a copy of the video because (my) words cannot accurately describe his mesmerizing effect.

Copyright © 2000 Music is My First Language. All rights reserved